The Garden of Earthly Delights.

The central panel of Hieronymus Bosch’s the Garden of Earthly Delights is the panel of the triptych’s title.

This painting, unlike the first panel, is littered with frenetic activity. The figures are all nudes – some sensually engaged with others. Others simply play, engage in sports or cavort in the garden with companions, animals or imaginary creatures. Are these people ‘shameless’ or merely exhibiting an ‘adolescent sexual curiosity’?

In the centre foreground,  one of the largest figures in the painting gives us a clue. The foremost female figure of a group of females is adorned with two cherries – a medieval symbol of pride. To the left a man lustfully drinks from an exotic flagon and behind the group a man and woman lie encased in a giant mussel shell (a symbol of sexuality, carnality and lust). The two concentric circles in the centre (the pool and the circle of figures astride animals) may allude to eternity but more likely allude to the infinite cycle of sin (This theme has been developed in our time by the Chapman brothers – I will talk about their works in coming weeks). Yet strangely, the horizon line of the centre panel continues on from the left panel, suggesting a link between the two. The link would seem to be that both of these scenes occur on our world – in this universe. In contrast the last panel is clearly located in Hell (see in coming days).

Overall the three panels allegorically lead from the first to the second to the third.

The composition of the middle panel is balanced but quite open giving the figures freedom to move and do as they wish. This aligns itself with the idea that despite the fact that God has ordered the world perfectly for our benefit, we are still left free to make our own choices and live in the way we choose to live.

The third panel of the triptych will describe visually what the consequences of making the wrong choices are.

The Garden of Earthly Delights

Here I will describe the first of the three paintings in the triptych: Adam and Eve in the Garden of Eden.

Two tall rectangular side pieces flank a square centrepiece, each painted in great detail, suggesting a narrative spanning from creation to the end of time itself. The left panel depicts God presenting Eve to Adam in the Garden of Eden. The central panel is a vast panorama of fantastic creatures, exotic oversized fruit, weird stone formations and is peopled with socially flamboyant nudes. The right panel is a hellscape portraying the torturous horrors of damnation.

This is the first and left panel in the triptych. It is the simplest in design and the most calm in nature, but it still shows us the complexity of Bosch’s concepts at play.

In the centre, Jesus presents Eve to Adam. Birds, elephants, giraffes and every other kind of animal (some imaginary) populate the garden, which is characterised by green lawns, rolling hills, pools and an open ‘lightness’ symbolising purity and goodness. His figures of Adam and Eve exude both innocence and sexuality.

Even though this is the tamest of Bosch’s three panels it is still riddled with enigmas. A cat runs off with a mouse suggesting that not all is perfect in this garden. The imagery is not restricted to biblical or other traditional textual sources, but utilises Bosch’s imagination, a sign of the Renaissance to come.

In the left panel, it may be that the inclusion of fantastical creatures, the unsavoury-looking crab based tower in the centre and the cat eating the mouse, left of Adam (such an act would not have occurred in the original Garden of Eden, according to Christian theology), suggest that temptation is already present in the garden. It is most likely that the continued horizon line shows that the first two panels are located at some place on the Earth, whereas the third panel is located in another dimension altogether.

While this first painting in the triptych is seemingly located in Earth, its fantastic elements suggest that it is also a kind of idealised version of some of the spiritual elements present in the Garden of Eden.

I will write about the other 2 panels in the coming days. If you have any questions about anything just email me.

Time Unbound is the title of my Master of Arts (Honours) thesis which I completed a short while ago. I am in the process of deciding how I will proceed with the publishing of the work. In total it is over 60,000 words long and discusses and explores the representation of eternity throughout the ages in art.

The above image Winter Landscape with Church by Caspar David Friedrich (1811) is one of over 100 art works discussed throughout the thesis.

This work shoes a tiny figure leaning against a rock, his crutches left in the snow suggesting he is done with traversing the endless countryside – that it has gotten the better of him. Yet there is still hope. The rock may be seen as a place of rest, and the meticulously depicted pine trees mirror the outline of the true place of respite not far away, the church. Like many of Friedrich’s paintings, there is an inner silence and tranquillity which invite the viewer to experience the peace the figure may be feeling. The grey mist may conceal much of the landscape but it has the effect of rendering it endless, its power and vastness not only insurmountable, but also mysterious and unfathomable. Behind the church a faint glow of red could be either sunrise (a sign that salvation is never far away) or sunset (a warning to the pilgrim to not tarry for too long before the night comes).

Eternity is a place of rest here. The mist signifies its mystery and also its endlessness. It also suggests that eternity is not of this material world, but rather a different place where the spirits of both God and man co-habit.

Winter Landscape is a painting of hope and sanctuary.

In contrast, the image below is a modern work by Australian artist Louise Hearman called Untitled 835 (2000).

The quiet nightmarish world depicted in this oil painting employs dramatic contrasts and an eerie misty lighting to evoke a world of dark mystery which could be interpreted as a form of Hell.

Here a boy looks out at the viewer from behind a wall of flame like grass. Hearman’s light sometimes seems to come from within the depicted subjects themselves giving an otherworldly quality to the subjects and a dream-like aura to the works. The children in her paintings are not quite children.

The grass allude to the flames of Hell, while the boy’s otherworldly inner light suggests a soulless figure, a ghost of a person.

This is not the blatant hellish horror of Hieronymus Bosch’s paintings or the violent, gory  images of a modern film depicting Hell come to Earth. It is a more familiar Hell – otherworldly, but somehow near – almost under our skin.

Time Unbound also discusses the different approaches to deciphering the topic of eternity – secular, Christian, Buddhist, Hindu, Moslem, scientific, new age and personal. I will periodically post some of the more interesting parts of my thesis in the coming months and if anyone has any enquiries about Time Unbound then I would be more than happy to answer any of those questions.

Bouquet is a botanical painting which will fit well into my collection of paintings being completed for my ‘Illuminate’ exhibition being held in the Professional Centre at Easter 2016.

Bouquet is an oil painting, not of an actual bouquet of flowers but of an idealised version of one. This bouquet is alive with movement and life, and it is this life which seems to be oozing from the light which surrounds and permeates the motifs in this painting.

Bouquet is a happy painting.

Bouquet will fit well in my ‘illuminate’ exhibition coming up on 6:00 PM, 24th March, 2016 at the Professional Centre here in Coffs Harbour. I hope to extend this idea of a light which imbues life into the subject it influences in other paintings being produced for the Illuminate exhibition.

The square format of the painting also helps to frame the movement of the light. I love working in a square format and intend to produce a number of smaller square paintings for this exhibition. The work for the Illuminate exhibition will include botanical, landscape, surreal and conceptual works all exploring ideas and concepts which surround the topic of illumination.

If you have any questions about my work or am considering buying a painting then just contact me via my contact page.

This cityscape is not yet finished, but is being posted as an example of what will be coming in my upcoming exhibition ‘Illuminate’, which is to be held at the Professional Centre on the 24th of March 2016. 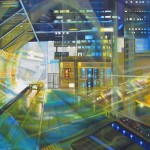 This is large painting uses shafts of light to change and play with the various forms and structures within the painting. Different parts of the painting shift and shimmer because of these shafts of light. The illumination of this cityscape is part of the life of this city and yet transports the viewer’s perceptions to another place beyond that of the city. There is at least one other cityscape in production at the moment.

This is a design of the poster I’ll be putting up for the exhibition.

The exhibition at the Professional Centre will be a gala event with food, refreshments, music, art and lots of bubbles. I am working on about sixty paintings at present for this exhibition and hope to create a variety of works ranging from nebulous surreal explorations of illumination to sparkling garden paintings decorated by an imaginary light (or lights) which transform the picture into something fantastic.

In the coming weeks I will be posting images as they become completed and I also hope to put up a few new musical pieces.

This website has not been as dynamic as it should have been in the previous year or two. I will be keeping it liquid from now on and am hoping viewers will respond with some positive comments. I hope to write more blog posts, add new images and music pieces and maybe add some stories in the coming months.

I also hope to start up a shop for open edition prints soon. With the shop, paypal will be available (it already is available for buyers) and I will probably restrict the size of the prints to about 2 sizes to choose from.