The painting Afternoon Storm, Coffs Harbour is done in oils and depicts a storm coming from the Dorrigo Plateau towards Coffs Harbour. In spring storms often come from this direction. Then they pass over the town in the late afternoon. 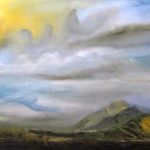 In this afternoon storm, the clouds looming on the horizon still allow a little sun to shine through. The hills are in shadow.

A Brief History of Landscape Painting

Portraiture and history painting dominated the art market in the centuries leading up to the eighteenth century.However, there were still some notable works of art which concentrated on landscape.

Other artist like Hieronymus Bosch painted vast landscape littered with people committing all sorts of weird acts. He also added fantasy creatures and strange objects, trees and animals. Other artists to paint landscapes in this early period of the genre included, the Van Eyck brothers. The neo classical French artists Claude and Poussin also concentrated on landscape. Poussin often used it as a backdrop for his history paintings.

It was the Romantic Movement which saw landscape painting come into its own. Artists like Caspar Friedrich, Constable and Turner painted a great variety of landscapes.

Friedrich’s landscape pondered the greatness of God. They were vast and had little features and details.

Constable painted delicate images of the English countryside.  While Turner painted quickly and masterfully. His paintings of the sea have a great deal of movement in them.

Today landscape paintings are done with much variety. It would be interesting to see what a google search for ‘afternoon storm’ might show.

This site uses Akismet to reduce spam. Learn how your comment data is processed.