Illuminate is the title of the exhibition I will be holding at the Professional Centre, which will open at 6:00PM on the 24th March 2016. Illuminate will display over twenty five paintings in my new ‘illuminate’ series of works. There will also be other works at the centre because of the size of the centre and its ability to display about 70 paintings at a time. 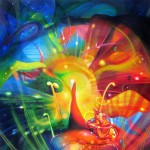 There will be an opening night on the Thursday before Easter at 6:00PM when visitors to the centre can enjoy a night of music and refreshments while viewing the works in the illuminate series. The last exhibition I held at the centre attracted over 120 visitors and I expect that this one will be at least equally as successful.

The works themselves revolve around the various concepts which emanate from the idea of illumination. I have been playing around with various visual effects and the effects of light and colour on the world around us. Vision is impossible without light. Colour cannot exist without light. The world we see is a construct of light – but what exactly is light?

Light is many things. In art it is an adornment to the inner integrity of a work. Light is also a revealer of truth. Some of the other ideas which are being explored in this series of works include ‘revelation’ and ‘space’. In these works light plays games with the three dimensional plane of the works, causing some parts to move backwards and forwards in unusual ways, subverting the normal perception of the picture plane and revealing new perceptions.

I like to think that viewers can look into my paintings and see new things with each new viewing.